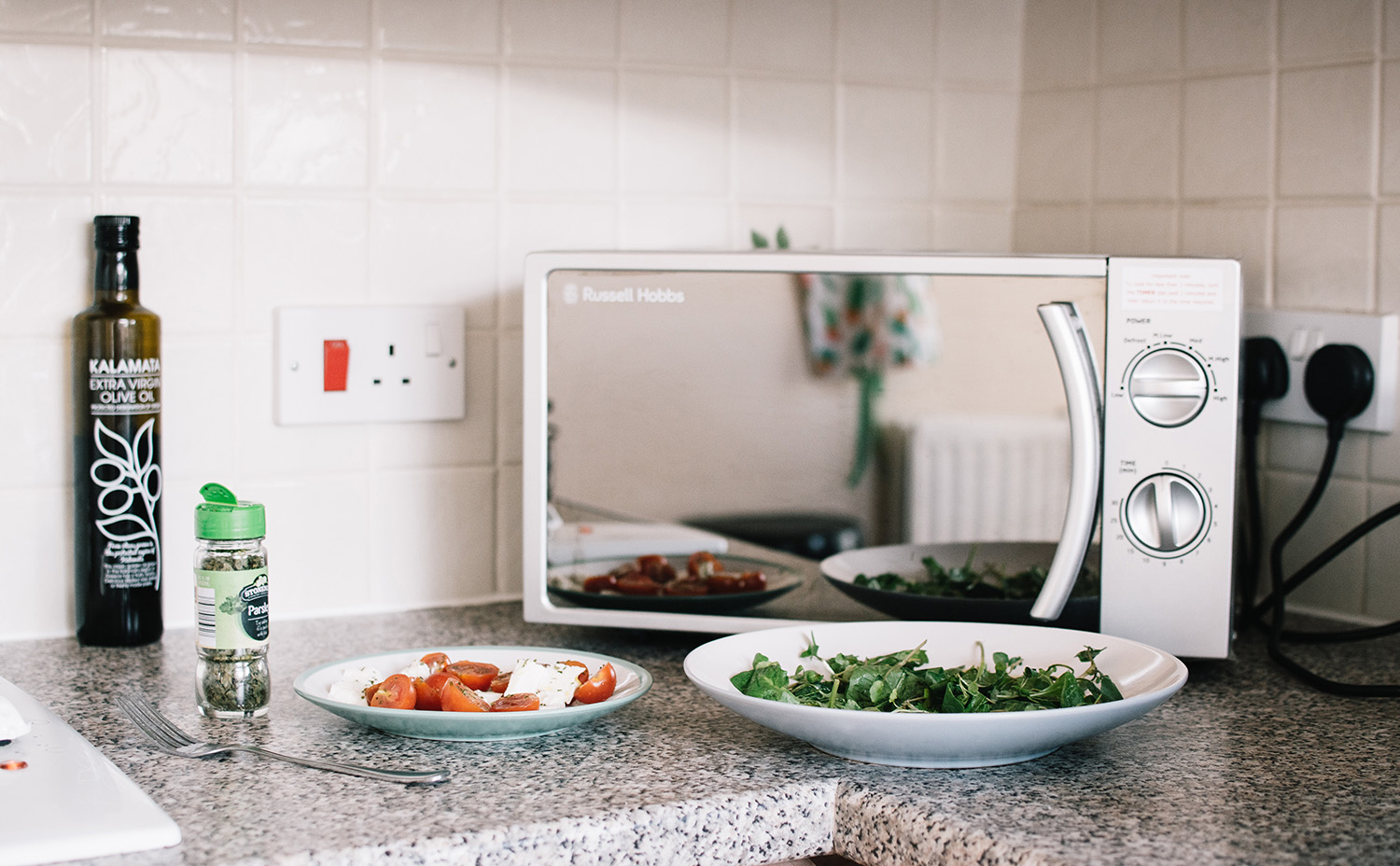 Today, every kitchen would seem “under-equipped” without a microwave, with its efficient ability to cook, defrost and reheat a variety of different foods. The convenience they offer is undeniable. But despite the widespread use of microwave ovens and their excellent safety record, some people have lingering doubts that cooking food with microwaves somehow makes food less healthy by zapping the nutrients out of food. The internet is awash with articles and blog posts about the dangers microwave radiation poses to your food. However, this notion that microwaves are worse for us than other forms of cooking is not supported by scientific evidence. By the end of this article, hopefully we can allay your fears by checking some common danger claims against the evidence.

Understanding how microwave ovens work can help clarify the answer to these common questions. Microwaving involves cooking food at a very high temperature for a short amount of time using radiofrequency (RF) radiation. RF radiation is a non-ionising form of radiation at the low-energy end of the electromagnetic spectrum.

Microwave oven cooks food by by emitting waves of energy that causes compounds—specifically water molecules—in your food to vibrate. The vibrating water molecules rub up against one another, which generates heat energy through (harmless) friction. This process is similar to that in which you feel your hands get warmer when you rub them together. The heat energy reaches molecules that are about an inch below the outer surface of the food, and cooks the food.

Does microwave put radiation in food?

Perhaps the biggest health scare out there is inflicted by those who claim that microwaves emit ‘harmful’ radiation, turning innocent food compounds into radioactive substances capable of causing cancer. With radiation, most people start to picture a nuclear contamination zone, complete with eerie green liquid spilling everywhere and clouds of carcinogenic pollution. If you’re a history buff, you might get a mental image of the mushroom cloud over Hiroshima, terrifying evidence of the stakes in the approaching Cold War. But hold off on the post-apocalyptic doomsday scenarios for just a few minutes: not all kinds of radiation are the same!

Let’s make a distinction between two very different kinds of radiation: ionising radiation and non-ionising radiation. Ionising radiation, which can remove tightly-bound electrons from atoms, causing them to become charged, is less risky in very tiny amounts (such as x-rays) but can cause problems when exposure is high (think burns and even DNA damage). However, microwaves, along with plenty of other radiation sources that surround you every day like power lines, TVs, wifi, cellphones, and light bulbs, emit non-ionising radiation; a type of radiation that has enough energy to move atoms around within a molecule but not enough to remove electrons. What does this mean? Because the radiation from microwaves is non-ionising, it can only cause molecules in the food to move.

What’s more, you’re protected even from this non-cancerous radiation by a kind of “safety net” called a Faraday cage, which prevents almost all the radiation inside the microwave from leaking out. That’s one reason why microwaves automatically shut off when you open the door: it’s a safety lock on the Faraday cage to make sure the radiation stays inside the oven where it belongs. The amount that gets through is minuscule compared to the amount of radiation that you’re getting from everything else in your home.

Several observational studies have tried to measure the relationship between microwaves and cancer, and the results have been all over the place. Some studies show a very small correlation between breast cancer and microwave exposure and others don’t. Other studies found absolutely no effect for mammary tumors (breast cancer) in mice, even at doses much higher than any human would ever get from a microwave oven. In fact, another study has revealed that barbecued fish contains more HCA (a carcinogenic chemical that is formed when meat, poultry, or fish is cooked at high temperature) than microwave-cooked fish, while HCA could not be detected at all in microwaved beef.

Though common parlance associates microwaves with nuclear radiation—microwaving food is sometimes referred to as “nuking”—there is nothing nuclear about microwave technology. According to the American Cancer Society, microwaves don’t use x-rays or gamma rays, so won’t make your food radioactive, and won’t change the chemical or molecular structure of the food. Cancer Research UK also agrees that it’s safe to use microwaves, as long as you follow the instructions for proper use.

Does it zap the nutrients out?

As for the nutritional value, it’s true that microwaving does destroy some of the nutrients in food, but any cooking method does that: microwaving isn’t unique. Putting raw foods through —including heating and cooling—leads to changes in their physical properties, chemical composition and nutritional profile. Think back to a time when you boiled a vegetable like broccoli. You may have noticed that the water turned green. The water-soluble vitamins leach into the water during the cooking process. Any type of heating will destroy some nutrients in food, especially vitamin C, which is very heat-sensitive. Luckily, vitamin C is plentiful in raw fruits and vegetables, so you can compensate there. Proteins are also ‘denatured’, which means that the proteins are being broken down, and it happens when they are heated by any means of cooking.

According to research published by the Harvard Medical School, you'll be pleasantly surprised to hear that microwaves actually do a better job of preserving nutrients that break down when heated because cooking time is so quick. In fact, the best way to retain vitamins and nutrients when cooking is to use short cooking times that limit the exposure to heat and a cooking method that uses as little liquid as possible—two things that are easy to achieve with a microwave, although studies show that the very best way to retain nutrients in vegetables is to steam them. One study compared microwaving or steaming vegetables, such as cabbage, carrots, cauliflower and spinach, to pressure cooking. It found vegetables that were pressure cooked lost more insoluble fibre, which is good for gut health, than those that were microwaved or steamed. Additionally, another study reported that microwave cooking produce the lowest antioxidant losses in 20 vegetables when compared to pressure-cooking, boiling or frying.

How about the packaging?

As I’m sure you’ve heard, concerns have also been raised about the use of plastic containers when microwaving food. There is some evidence to suggest chemicals in plastic packaging can migrate into foods when microwaved, which has been associated with increased risk of cancer. But most of today’s plastic containers, packages and wraps are specially designed to withstand microwave temperatures. If your packaging is marketed as microwave safe, has a microwave symbol or provides for proper microwave use, it is safe for microwave cooking or heating.

On the other hand, the organisation Breast Cancer UK urges the authorities to ban BPA, a type of plastic not only used in microwave ovenware but also in most packaged products. However, if you’re still concerned about these risks, switch to the safest alternatives, such as glass and porcelain containers for microwave cooking.

With all that said, it’s clear that microwaves don’t pose a significant health hazard nor do they cause cancer. If the convenience of a microwave makes your life a little easier, there’s absolutely no reason to avoid them. However, when it comes to using a microwave in the healthiest way possible, there are a number of things to watch out for:

-  They heat unevenly. This can create unpleasant hot/cold spots in your food. It’s not safe to heat breast milk or baby formula in the microwave because microwaves often heat unevenly, so the contents may be hot even if the bottle feels cool. This unexpected hotspot could cause burns to the baby’s mouth, it’s not because the microwave changes anything about the milk itself.

-   Rotate and stir foods during cooking to spread the temperature of heating equally and as such minimise potential for food-borne illness.

-   Say “no” to plastic wrap. Pre-packaged foods aren’t the only dangerous ones. If you wrap your food in plastic wrap or plastic containers, the chemicals from the plastic can leak into the food. One of the most dangerous chemicals found in packaging is BPA, which disrupts your hormones and leads to disease including infertility, mental disorders, high blood pressure, and weight gain. When you are using the microwave, switch to safer alternatives such as glass or porcelain.

-   Defrost only on the defrost setting. When defrosting your food, make sure to set your microwave to “defrost” or “50% power” in order to make sure your food is safe. If it heats too quickly, the outer edges may become cooked, while the inside remains frozen.

-   No squishing your face against the glass while you wait for your food to cook.